Tehran is not only the capital of Iran, but a microcosm of it in many respects. So it’s fair to say that the tension between public and private spaces generates the main spatial drama in Tehran. The codes of behavior can dramatically change when moving from one space to another, and there’s a whole range of often conflicting gestures that a single body should embrace through its daily movements. That’s why preferred publics might be more easily assembled in private –– a party is most often a house party. But sometimes this can make it difficult to determine which space is whose, or where one space ends and the other begins. To host the public of your choice, you are most likely to need a space of your own, but a privately gathered public is still a public and can summon the authorities, as it is and remains de facto haunted by them. The interiors of a friend’s car driving around the city can feel pretty weird in this sense. “Should I behave by the codes of a private inside or the public outside?” Well, that’s just the routine banality of living the in-between. Tinted windows can make the experience a bit more clear-cut, yet the police might stop the car and ask for a look inside. 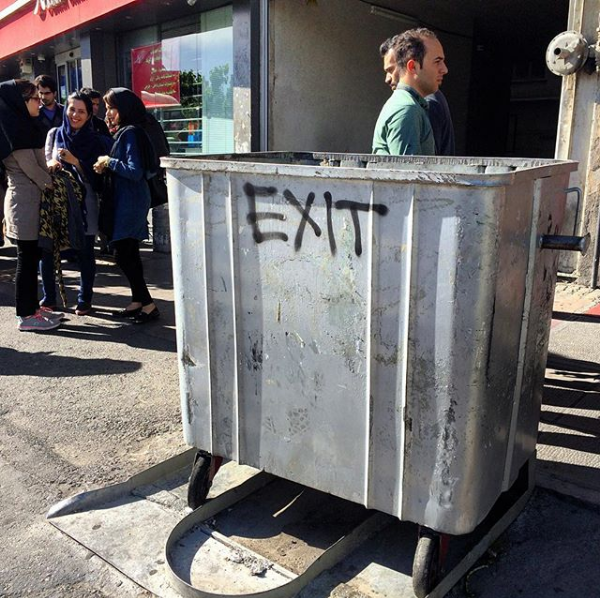 So it is in the background of this conflicted relationship between interiors and exteriors that I, among many others, often find myself planning to leave Tehran, to get out. My general impression is that it would make a fantastic city only if you wouldn’t feel stuck in it. And anyone who doesn’t have the immediate means to leave at any moment would feel painfully pinned down. There are all sorts of external obstacles, including structural poverty and the hazards of international mobility, that can turn the thought of a jailbreak itself into an unbearable prison, with walls made of anxiety and inferiority complex. There’s been a certain municipal trend in mural designs over the past decade or so that seems to have been targeted at soothing such feelings. Surrealist trompe l’oeils, fantastical perspectives, openings onto a serene sky, and pastoral sceneries have proliferated across the many blank city walls, sometimes blending with and seemingly extending their architectural support.

But against the false impression of open skies, there’s the EXIT. Hastily but most legibly written in uppercase, this graffitti has been rapidly appearing on numerous spots around Tehran. I must’ve noticed it sometime in 2015, and soon started archiving it on Instagram, hashtagged #TehranEXITmap. When friends finally realized that I’m not documenting my own work, my inbox kept getting flooded with images of their encounters, and I’d add them to the growing map. Street walls, trash cans, bus stops, roller shutters, and traffic signs have all had their moments of encounter with EXIT. Varied handwritings betray its collective nature. It’s not egocentric or identity-oriented, but a whole attitude exhibited in practice. Although painted out almost every day, EXIT keeps mushrooming, catching the passerby off guard. You might even start looking for them wherever you go. A blunt parody of escapism, this is a silent practice of territorialization, setting the provisional contours of a shapeshifting territory. So there can’t really be a map, as EXIT is not a signpost either. What fascinates me the most about EXIT is that it acknowledges a dire urge while brutally making fun of it. It’s an extremely simple yet profoundly deep gesture, verging on the status of a worldview, which makes it even more ridiculous. Every surface is turned into a means of reflection, redirecting the suddenly engaged passerby toward their own gaze and location. Upon encounter with EXIT, you are again and again placed on the inside, as if any position before, outside, or beyond this territory is rendered redundant. How can you exit a place without ever leaving it? The kind of opening that EXIT suggests is of a rhetorical nature: the only way out is a different way in.